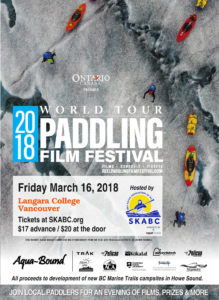 Since 2006, the Paddling Film Festival World Tour has been showcasing the very best paddling films. The World Tour screens in more than 120 cities around the world including Vancouver. Join SKABC to view this year’s best paddling films and get yourself inspired to explore rivers, lakes and oceans, push extremes, embrace the paddling lifestyle and appreciate the world’s wild places.

There will be door prizes and a raffle. Proceeds go to BC Marine Trails Howe Sound campsites that are under SKABC stewardship.

March 16 at Langara College in Vancouver. Address: 100 West 49th Avenue. Use the Langara main entrance on 49th. Theatre A130. There is parking off Ontario Street.