The SKABC Executive is pleased to announce the formation of the Howe Sound Stewardship Team to maintain the six campsites the club looks after. The idea is to carry out as much of the maintenance of these sites by kayak as possible. I will remain in my current role, now renamed “Howe Sound Marine Trail Steward.”

Individual Site Stewards have been recruited for each site:

Each Site Steward is responsible for recruiting their own site team: some teams will be groups of the steward’s friends and others may be run as club trips open to interested and qualified members. In this first year, each site will be visited three times: Spring Site Inspection (April/May), Midsummer Site Inspection (July), and Fall Site Inspection (October/November). Logbooks will be checked, toilets resupplied and minor site maintenance carried out.

Our first composting, urine-diverting toilet (using a ToiletTech pedal-operated conveyor belt mechanism) was installed and commissioned March 2019 at Zorro Bay! Number 2 (it takes both #1 and #2 deposits!) is at Bain Creek, opened April 2020.  It is our own design and entirely volunteer-built.  How does it compare with the original? Only time will tell - at least it has no moving parts except for the door!  In 2020 with some support from Trans Canada Trail Foundation and BC Marine Trails we used some of our Legacy Fund to hire a local contractor to build 4 more toilets, based on a Sunshine Coast Trail design. Two were completed in Spring 2020 - at Islet View and Tantalus Landing, and the other were finished in Fall 2020.

The six recreation sites were established in Howe Sound in 2015. These campsites are only accessible by boat and provide a vital link between the Lower Mainland, Squamish, and the Sunshine Coast. They were developed jointly by the BC Marine Trails Network Association and the Trans Canada Trail Foundation with the assistance of the Squamish First Nation, local Regional Districts and municipalities and Recreational Sites and Trails BC (RSTBC), a branch of the Ministry of Forests, Lands and Natural Resource Operations.

In the Spring of 2017, SKABC entered into a formal partnership agreement with RSTBC to take care of the sites at: 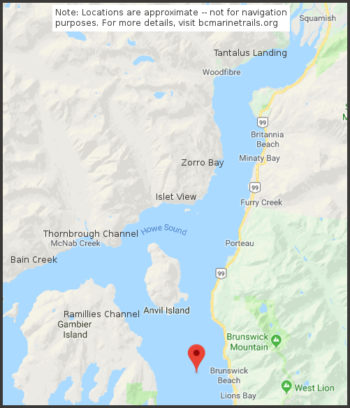 For detailed view, see the map at https://www.bcmarinetrails.org/bc-map

SKABC's future plans include improving and increasing the number of tent pads and/or platforms, depending on the slope. Access trails will be improved too, including kayak 'parking' at sites with inadequate beach space. Look for our visitor logbooks to sign in, make suggestions for physical improvements or report on how the site is being managed. Suggestions can also be sent to Steve Best, our Howe Sound Steward at s2smarinetrail@skabc.org. We hope visitors will send in comments - maybe with their smartphones while they are still at a site.

Here's a video tour of the Howe Sound campsites:

SKABC volunteers have been visiting and maintaining each site at least twice annually, at the start (May) and at the end (October) of the main camping season, but the frequeny will increase under the new 'team approach' begun in 2021. Transportation of people tools and supplies are by kayak, power boat or (rarely) water taxi. Through fundraising events and donations, we seek to keep access to these sites free to the general public. RSTBC also generously contributes to the site maintenance fund. SKABC accepts donations of building materials and tools of the right type.

SKABC happily accepts donations in coordination with BC Marine Trails (a registered charity) to fund future improvements and maintenance to the Howe Sound campsites. Thank you for supporting this great recreational opportunity.

If you wish to make a TAX-DEDUCTIBLE donation, you can do so through Canada Helps using the link below. (You may specify that your donation go to the Sea to Sky Marine Trail sites in Howe Sound.)