SKABC's leadership agrees with the spirit of BC's Provincial Health Guidelines and our COVID policies will continue to evolve accordingly.

In December, the Directors voted unanimously to require that members be fully vaccinated to attend club events in-person. Vaccination status has been added to the signup forms for our indoor and outdoor events. This policy will be in effect until further notice.

This decision came after observation and feedback from the past two seasons. When we gather with club members to paddle, we are with others outside of our usual social circle so it is important to follow the current provincial COVID-19 regulations and guidelines; however, wearing a mask on the water may be unsafe and ineffective. Risk of infection may increase as we help each other with equipment, perform assisted rescues, practice skills, eat, travel, or socialize.

Our January guest speaker Ross MacDonald kindly shared his excellent weather presentation and some of the resources he mentioned.

Thanks to the Social Committee and everyone who made our Christmas party fun! Here are some photos! 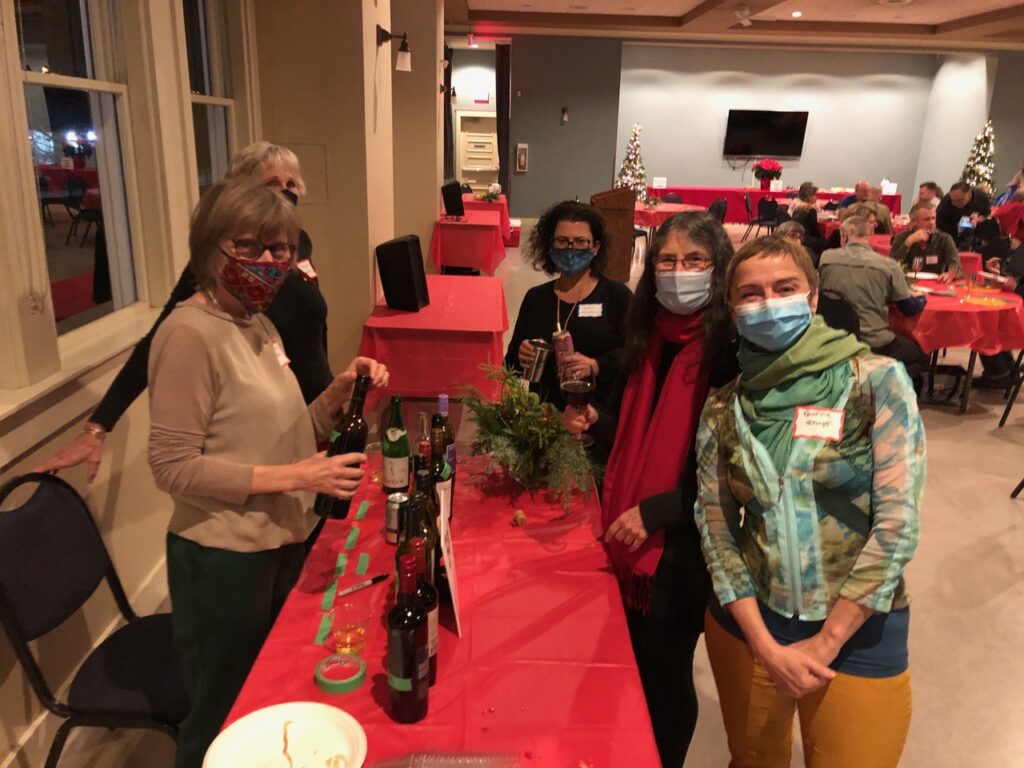 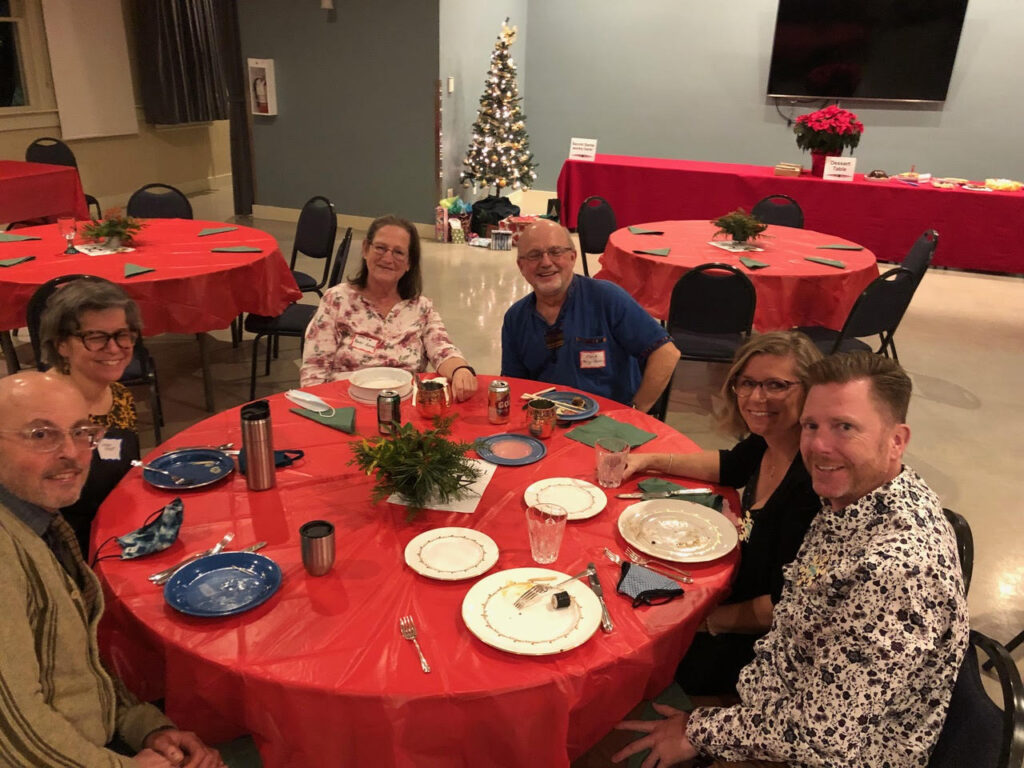 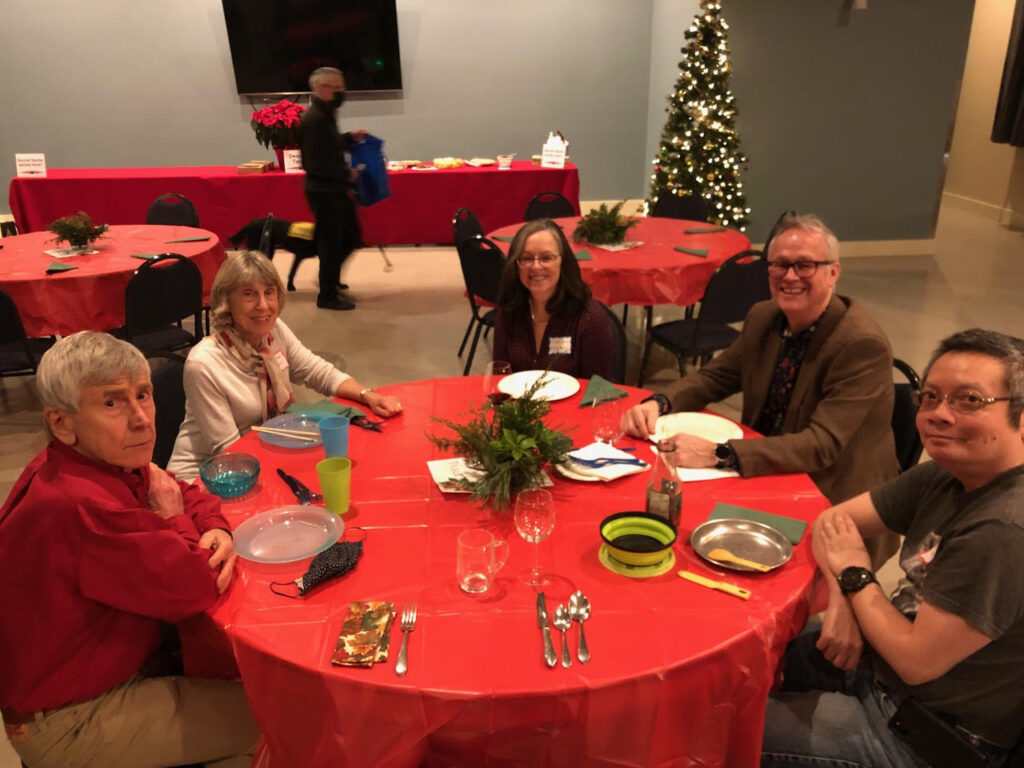 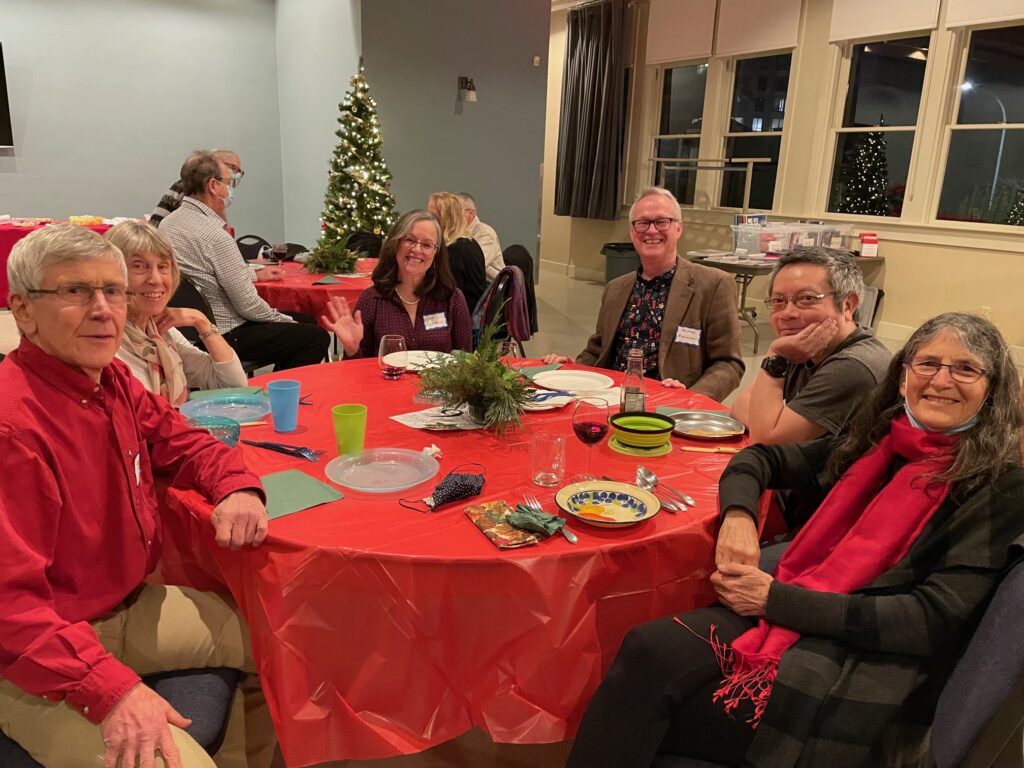 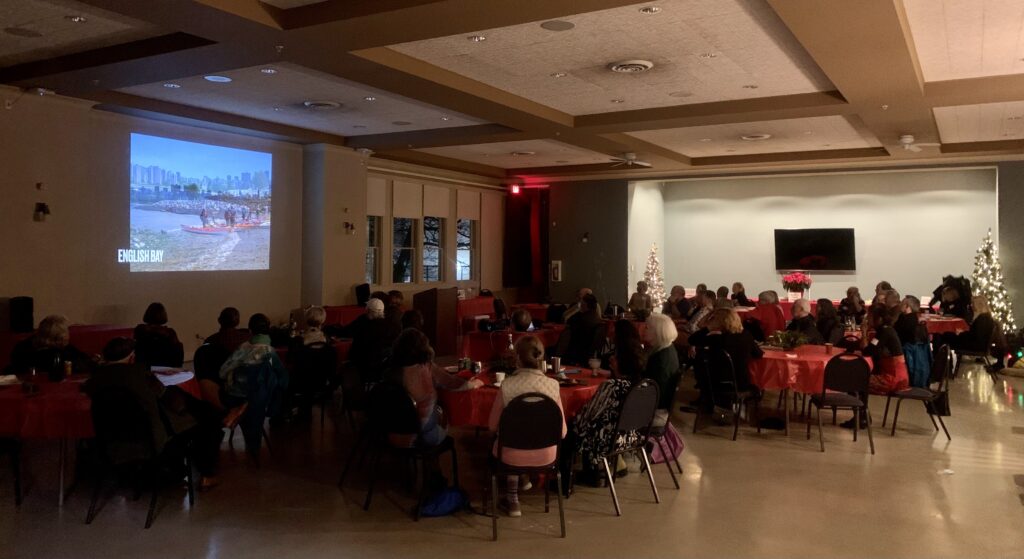 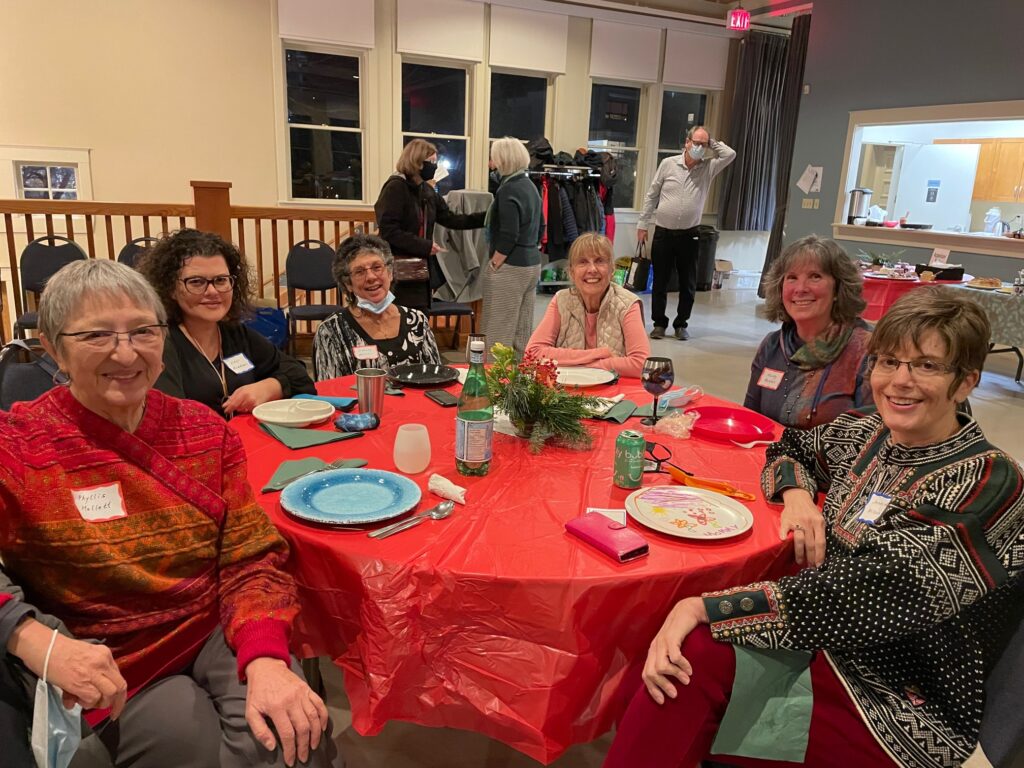 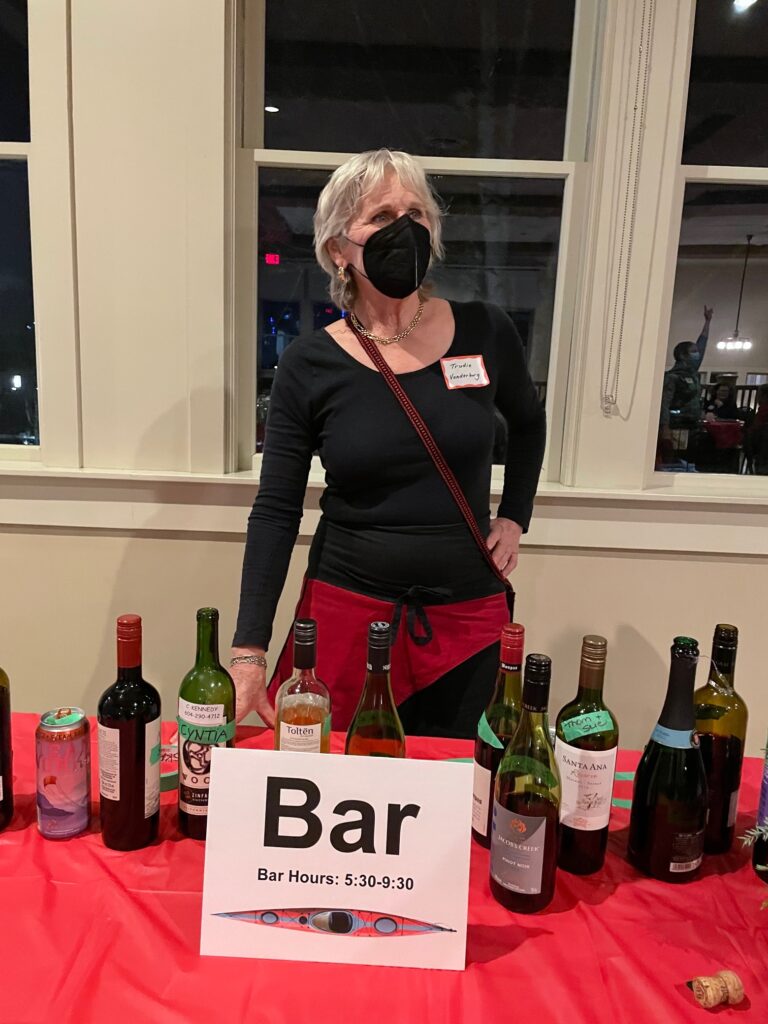 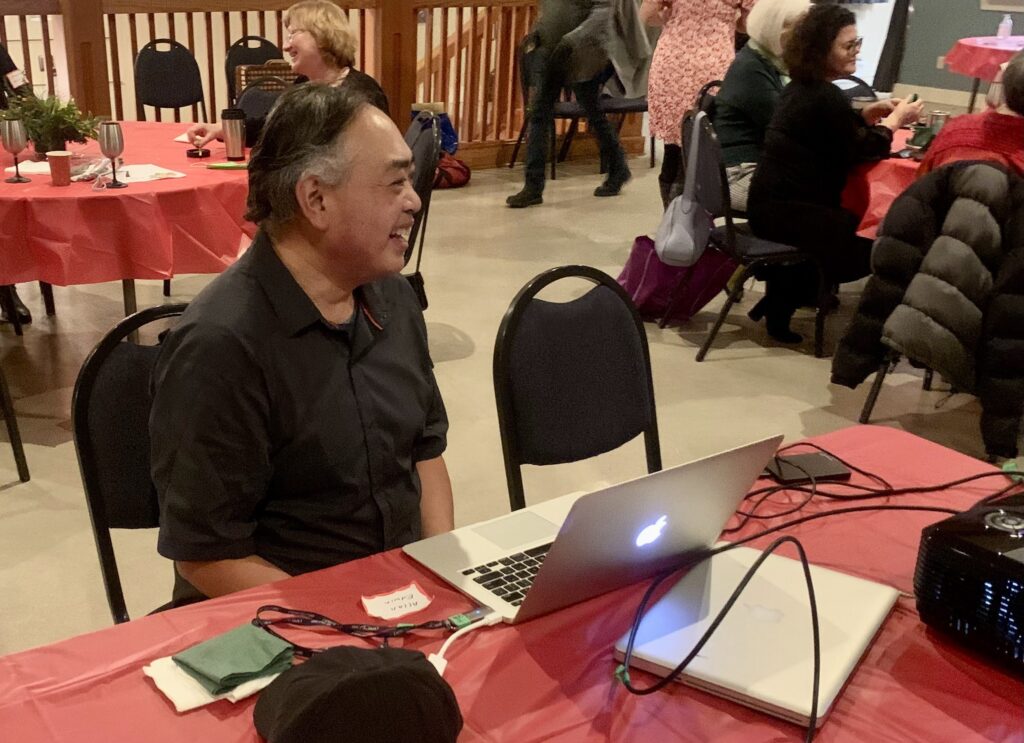 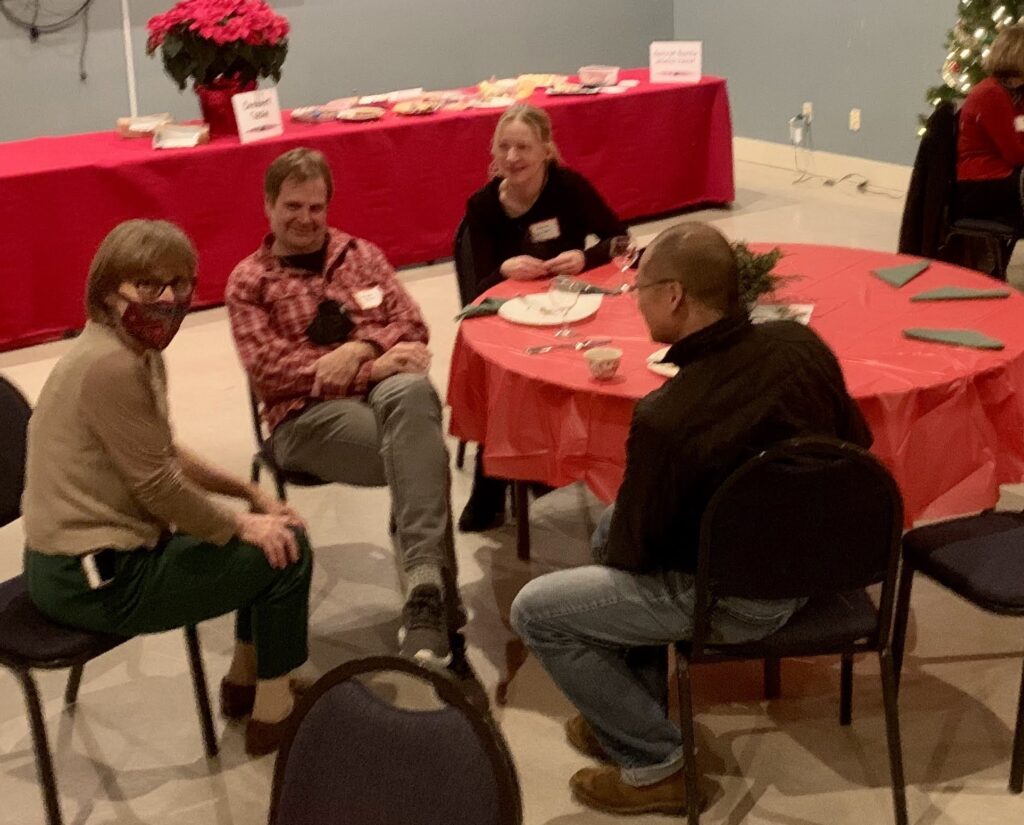 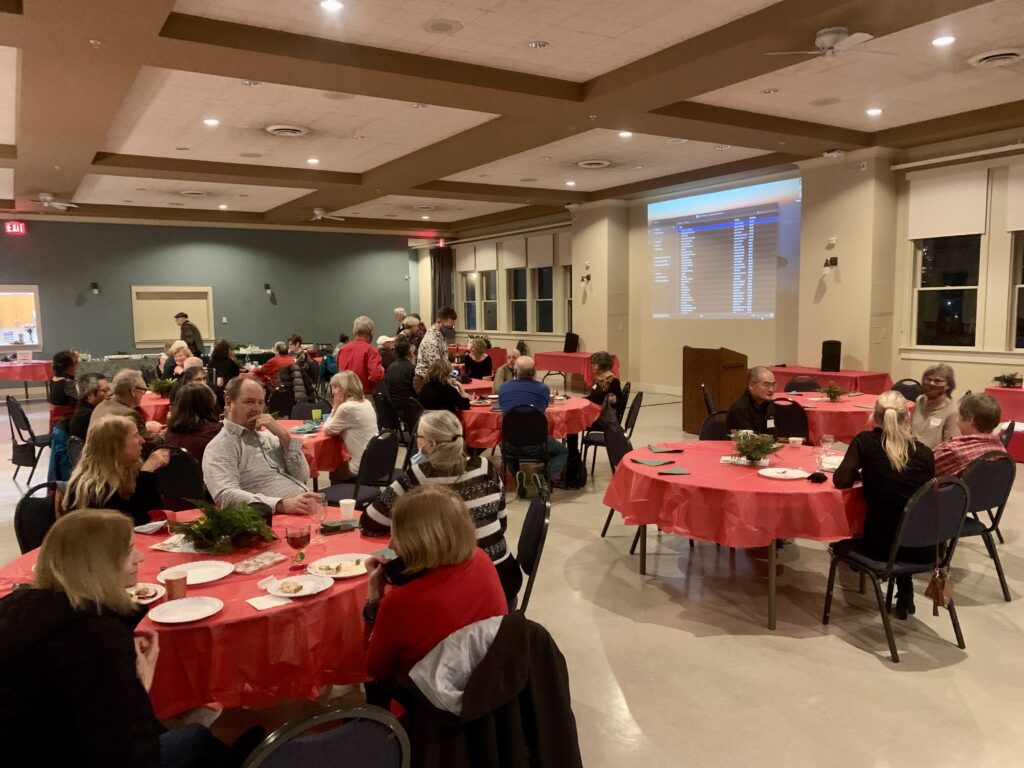 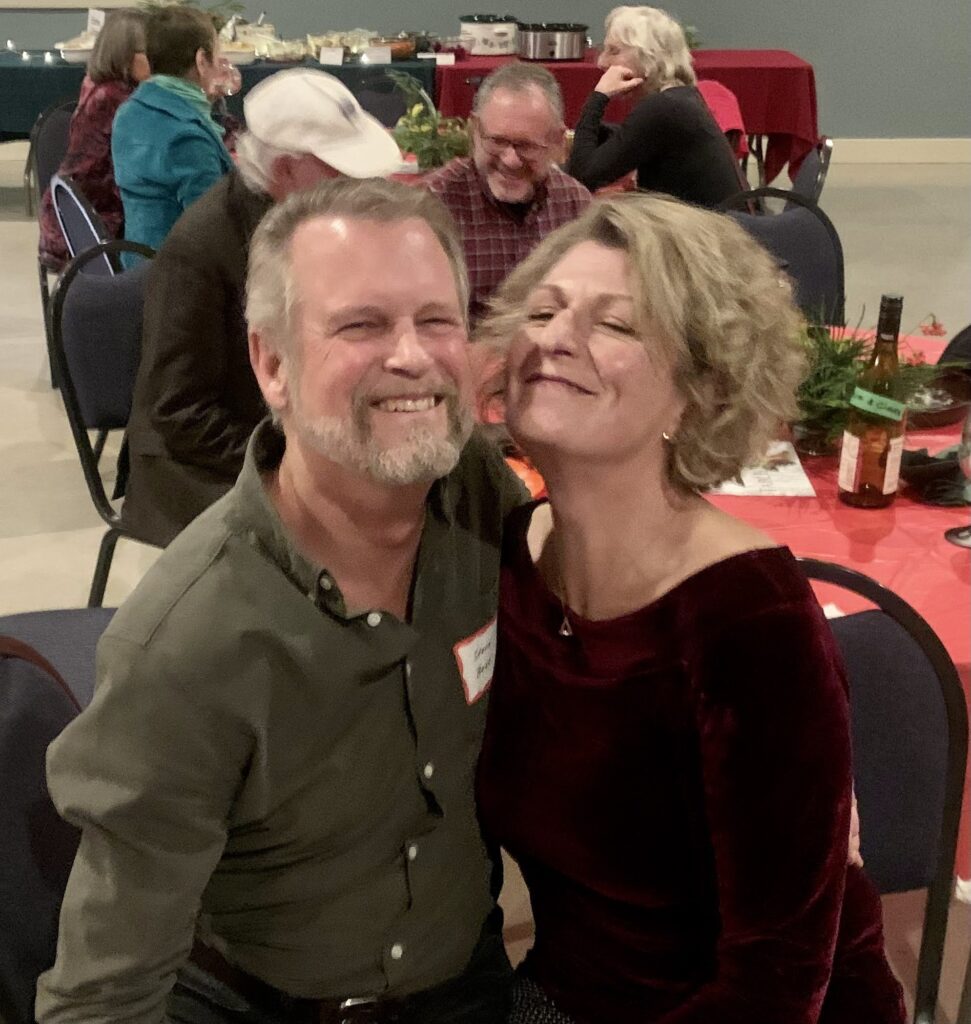 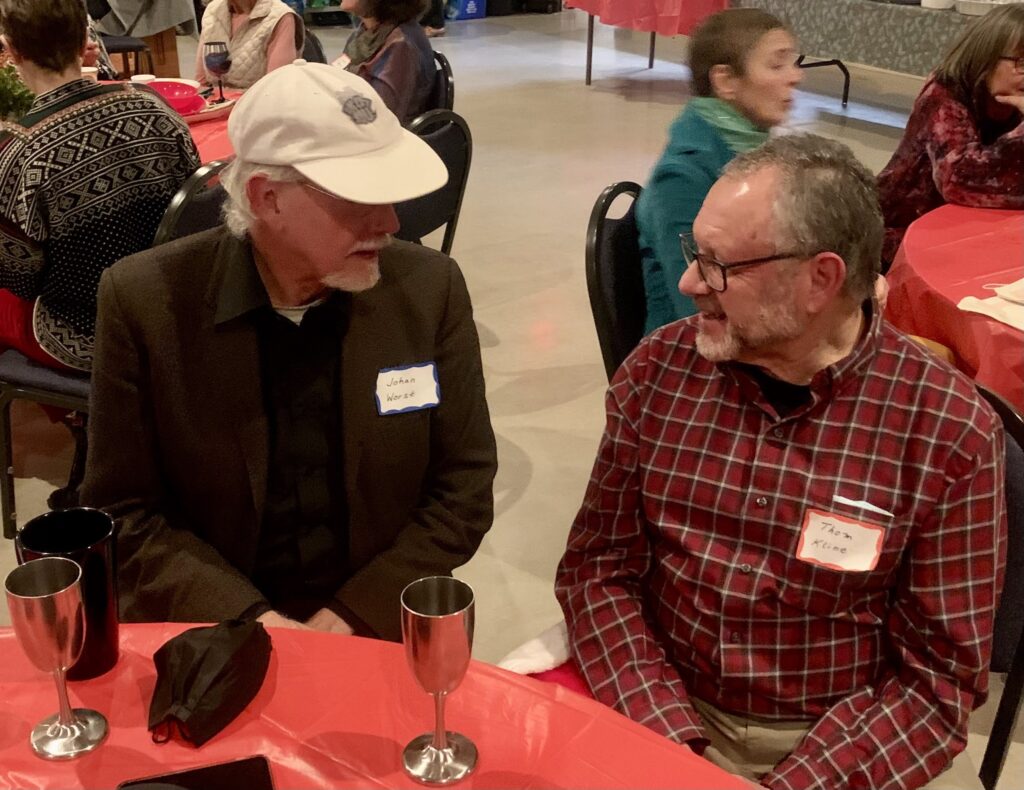 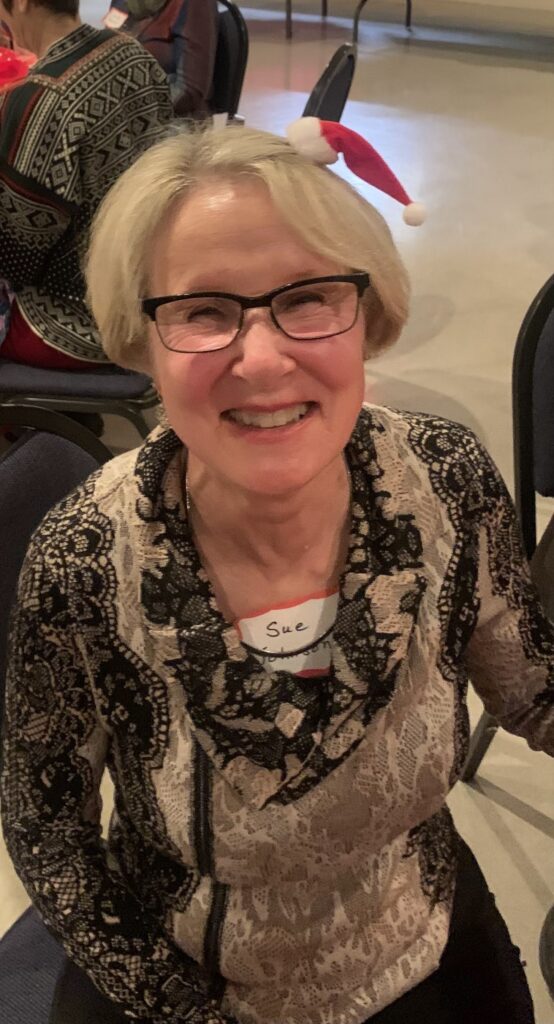 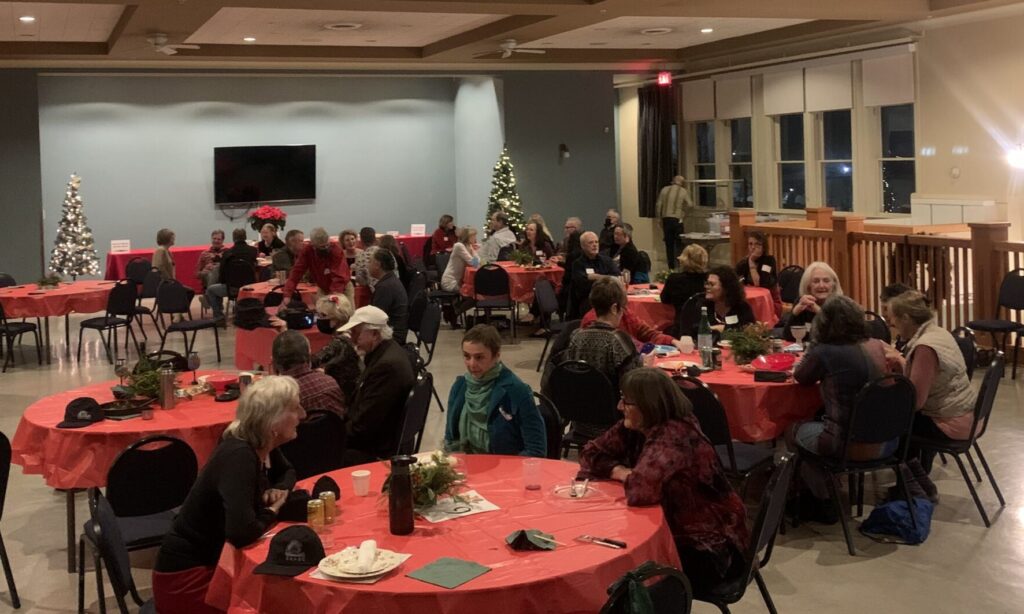 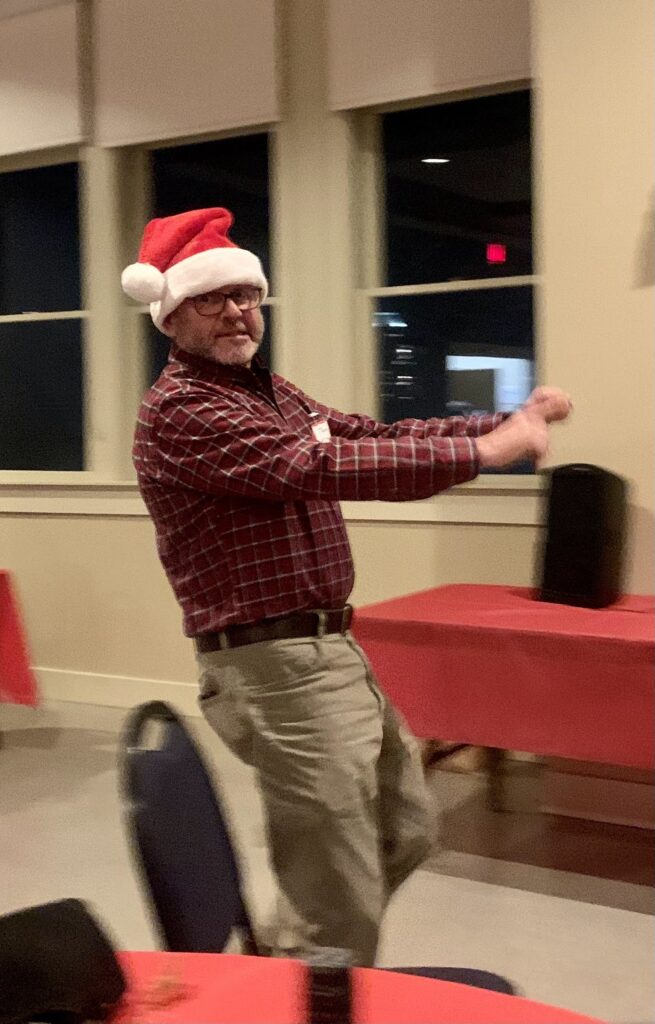 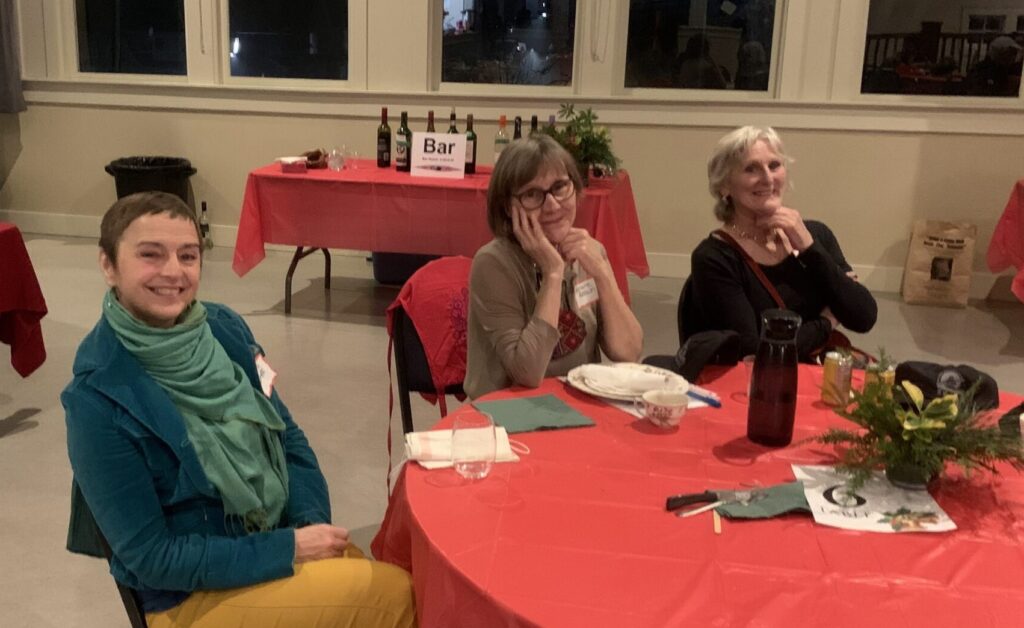 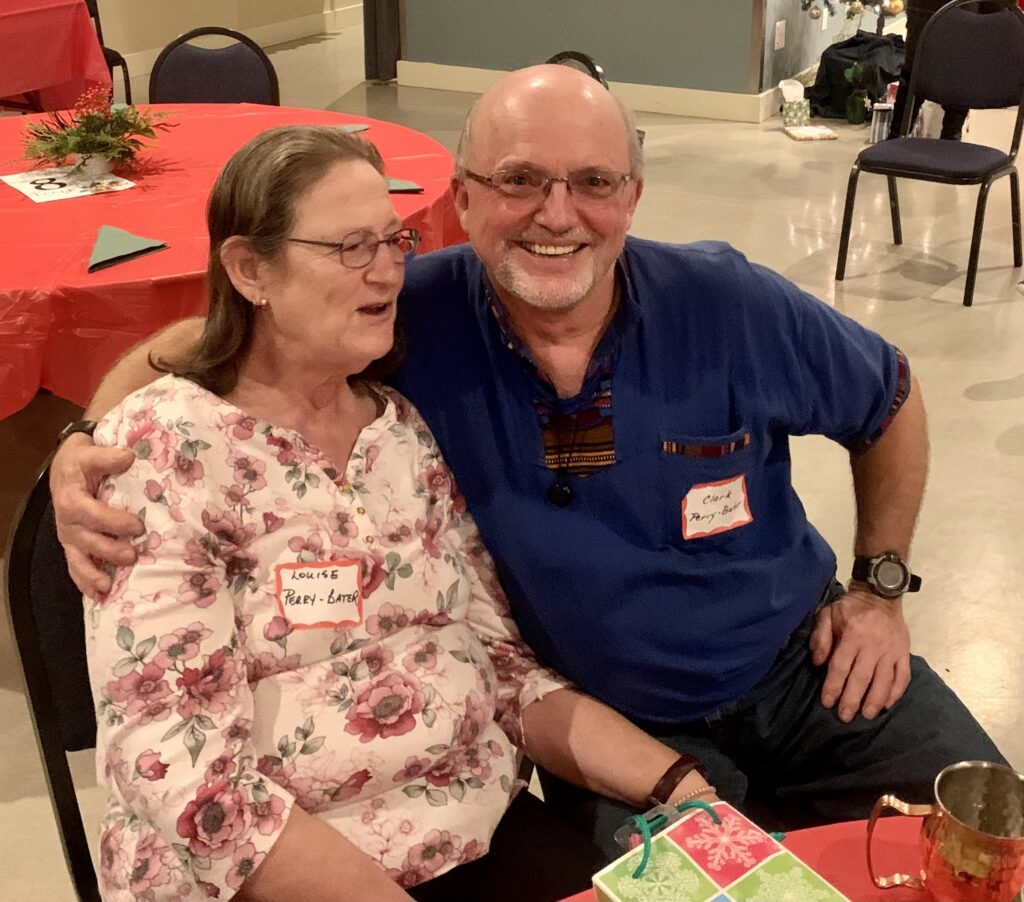 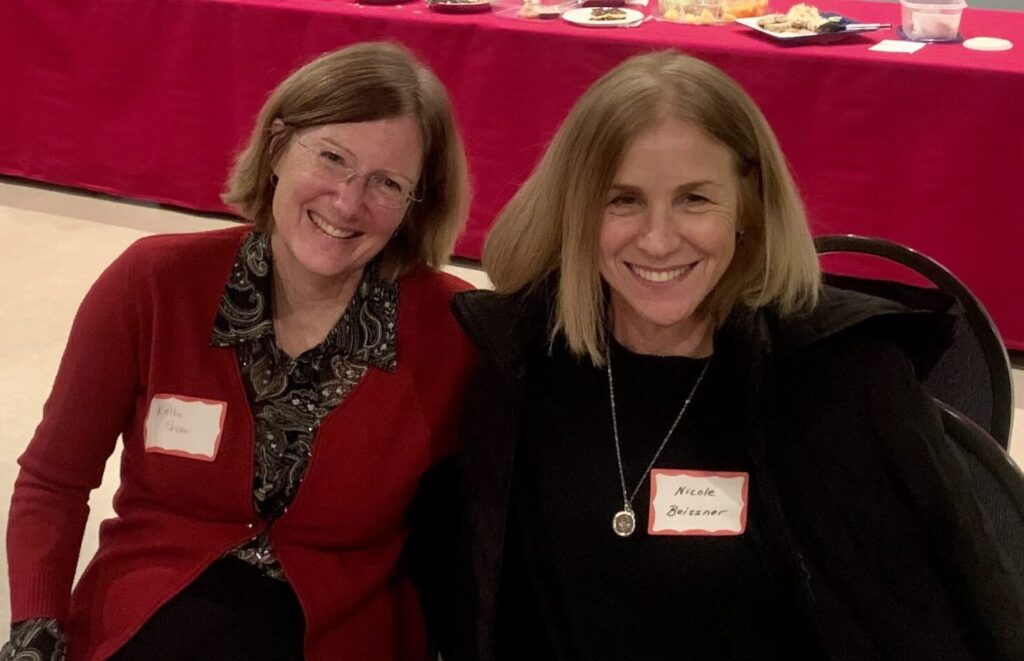 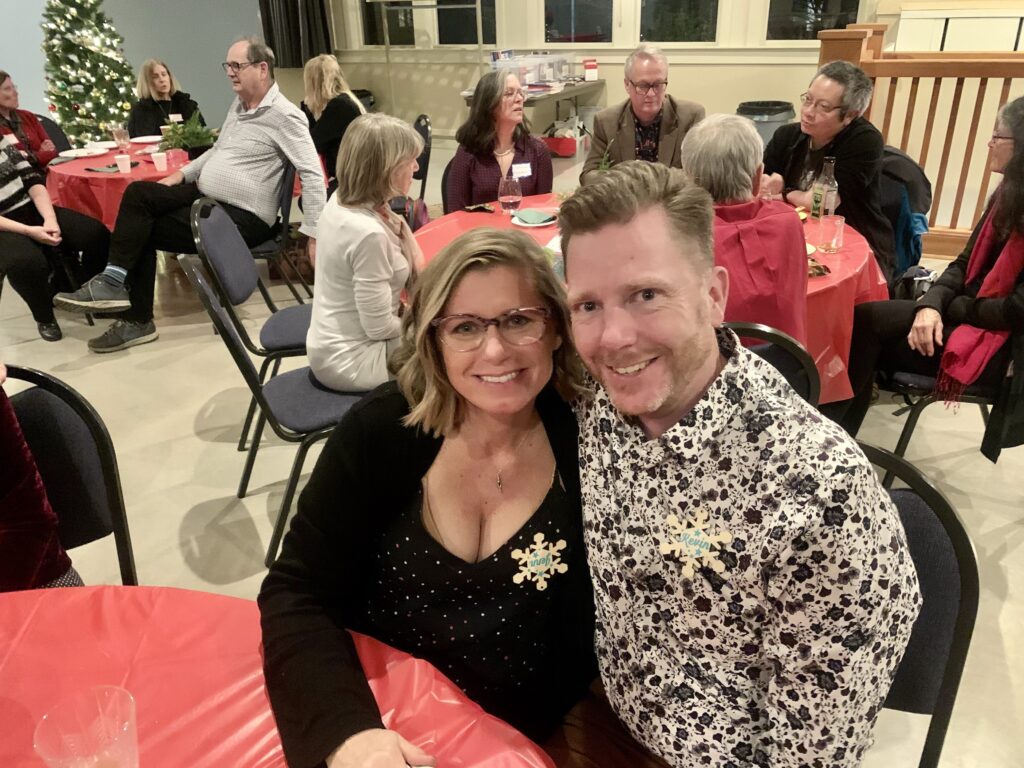 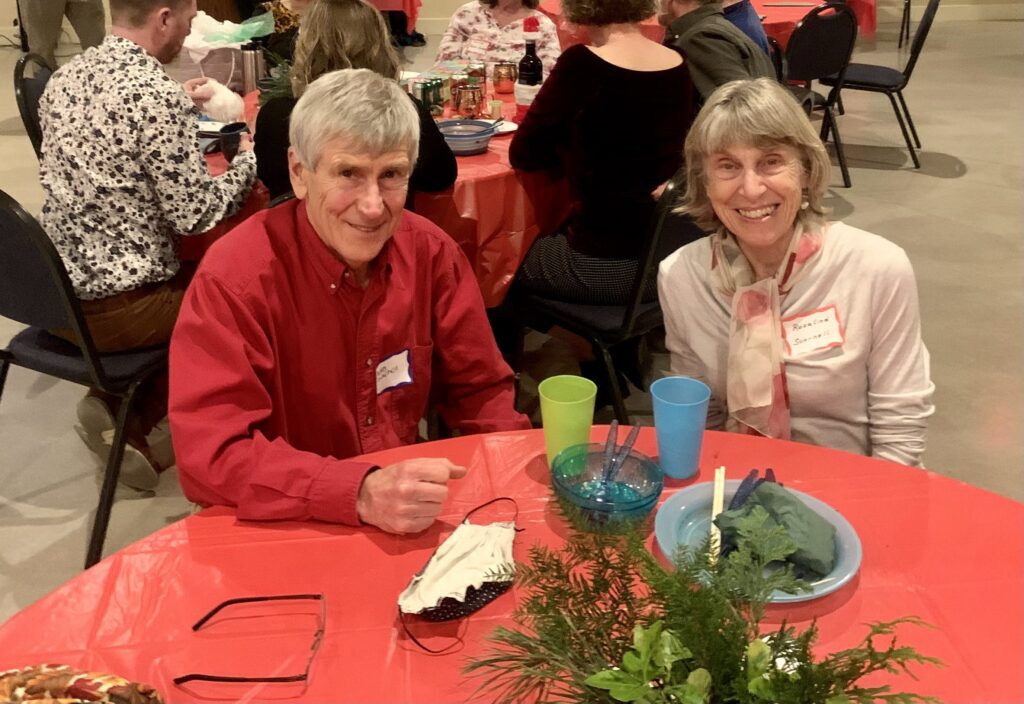 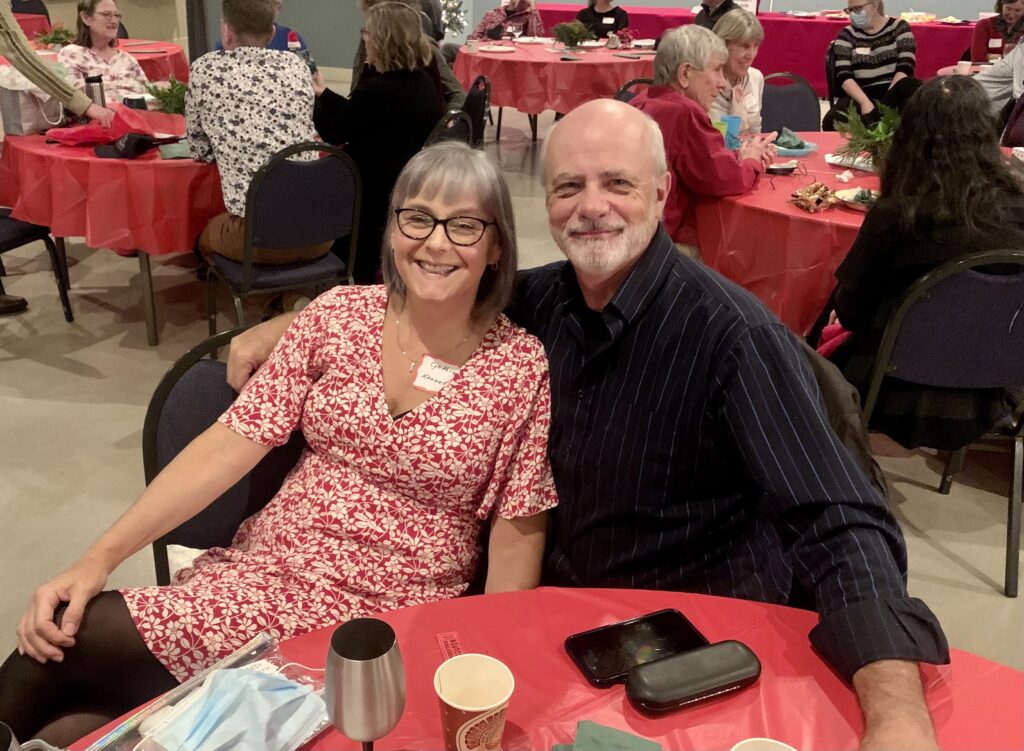 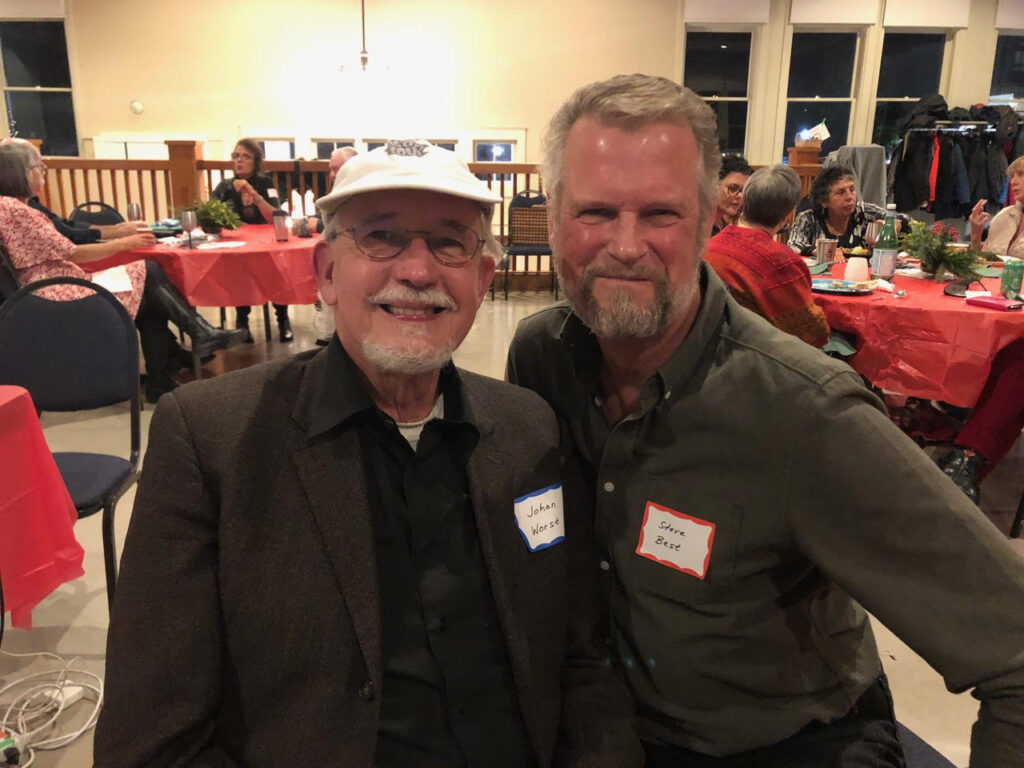 "We have the BEST people amongst us here tonight, and we also have the WORST. First, there is Steve Best. He is sitting at my table. Most people WILL recognize Steve as he is a long term volunteer with SKABC and in the kayak community as a whole. He is also our champion steward for Howe Sound. The other best is Johan Worst, also sitting at my table – beside Steve Best. Most of you will NOT know him as he is a new member. As his friend, I can tell you that besides being a strong paddler, Johan is a talented base and guitar musician who has played in symphonies, rock bands, jazz bands and everything in between. His music is amongst the tunes you are hearing tonight. That is the best and the worst bit of trivia that I have to share with you tonight." - Sue Johnson

Steve Best, Orca Award Winner for his work as Howe Sound Site Steward, Director on the Executive, involvement with BC Marine Trails, and long-time contributing member of SKABC.

Philip Kubik, Silver Paddle Award winner for his contributions over the years as Instructor, Trip Leader, Club Secretary, and Director on the Executive.

2021 SKABC Volunteers
by Steve Best, delivered at the 2021 Fall Fling, with gaps filled in after.

"COVID has really messed with the way SKABC does things. Around this time in a normal year we would be holding a Volunteer Appreciation Dinner, to acknowledge the hard work done by club volunteers. That was going to be a challenge this year, with venues unavailable, so we decided to acknowledge our volunteers tonight, when we are actually gathered in a rare in-person get-together.

SKABC is a volunteer organization, and you just have to look at all the categories of club officers listed on our website to get an inkling of how many volunteers are involved, and how diverse their roles are. I’m going to go through those categories now and, because I’m sometimes accused of being backwards, I’m going to go through the list backwards. Please wave when I call out your name.

Sue Johnson is our Member at Large on the executive, and chips in wherever needed. For example, she has helped the Social Committee put this event together, and she and her partner, Thom Kline, helped Brian Pegg with a site inspection at Islet View, and ended up helping me lay out tent platforms. Check out “Howe Soundings”, the video Thom made of their experience.

Mike McHolm is in charge of SKABC’s social media and is also Site Steward for Zorro Bay, one of our Howe Sound sites. In fact, Mike is at Zorro this weekend, doing his fall inspection.

Susan Jensen is one of the hardest-working members in the club. She is our Website Manager, and does a hell of a lot more besides. For example, she put a lot of effort into helping organize this event. And she also led two of our club trips this year, including a rescue practice.

Clark Perry-Bater is our Outreach and Promotions Officer. Clark is new to the executive this year and did a fabulous job organizing our virtual film festivals, one of the few club events that was able to go ahead when everything else was shut down. Clark had a committee helping him, George Prevost, Kevin Hall and Allan Edwin. Clark was also a trip leader today, co-leading one of the Twin Islands paddles, along with Cynthia Rose Lee.

Nick Jones is our Communications Officer. Nick used to be very active in the club, but got out of it just around the time I started getting involved, about ten years ago. Was it something I said, Nick? It’s great to see him back. He brings a lot of enthusiasm, and he’s doing a great job with the newsletter.

I am the club’s Howe Sound Marine Trail Steward, and this year I recruited six Site Stewards to look after the individual sites:
Cynthia Kennedy is Ramillies Channel Steward, and has had her husband, Dave and Theresa Davies helping her with site inspections.

As well as being an amazing and conscientious club Secretary, Philip Kubik is Bain Creek Steward, with his crew Kapila Jayaweera and Ted Lam. Philip turned his end-of-May site inspection into a major work party, cleaning up danger tree fallout, building steps on the trail to the toilet, and a kayak storage rack. And Philip was or will be trip leader for several club trips. Kapila and Ted were also Trip Leaders today for the Thwaytes Landing paddle.

And Kapila is also one of the club’s Conservation Officers, along with Deb Merchant. Deb has been representing the club in BC Marine Trail Cross-Club meetings. Deb also volunteered her husband, Richard, to build new housings for the Howe Sound site visitor logbooks. Take a look at them. They are at the end of the long table, and they are fabulous! What a craftsman.

Kevin Hall is our Thornbrough Site Steward, with the help of his wife Jen. You already know Kevin as our Programs Officer, and he has been doing an amazing job of getting us great speakers for our monthly meetings. I love the way Kevin has been doing his site inspections. He and Jen take their travel trailer to Porteau Cove for a vacation, and then pick their weather window to paddle over to Thornbrough for a day trip.

Brian Pegg is our Islet View Steward, and a key member of our tent platform crew. Brian is also an archaeologist who has led club paddles to view pictographs. Ask him about his motorcycle trials riding some time.

I’ve already mentioned Mike McHolm, our Zorro Bay Steward. As well as doing his site inspections, Mike paddled over with me to meet with the neighbouring cabin owners, and is helping out with signs that resulted from that meeting, through his graphics business.

Our Tantalus Landing Steward is Dave Berrisford, a Squamish resident and world class expedition paddler. I’m hoping you get a chance to know Dave, known as the “Bear”, a bit better in an upcoming meeting presentation by his paddling partner, adventurer Frank Wolf. Yup, the “Bear” and the “Wolf”. Dave was instrumental in arranging a $9000 grant from the Valhalla Squamish Trail Fund for tent platforms at a couple of our sites.

Our Social Committee consists of Jayne Hardy, Alice Wong, Quirine Schuyff, and Darlene Brown. Tonight, you are seeing the results of their efforts, with help from Sue Johnson.

Our Librarian is Lorraine Sharpsteen. I know that a lot of us are looking forward to browsing th e club’s books and DVDs again once in-person meetings resume. In the meantime, Lorraine somehow managed to arrange the return of all the library’s books and DVDs that had been lent out before the pandemic hit.

Scott Tebbutt is our Safety Officer. This year, our main safety concern wasn’t rescue practice or paddling conditions, it was COVID, when what activities could return, and how to do it safely. Scott’s was a key voice in making those decisions. Scott also led a rescue practice and was a trip leader today, co-leading one of the Twin Islands trips with Karin Hartner.

Allan Edwin is our Trips Officer, and at the end of the summer we finally saw some club trips return. I believe we got in a total of 14 trips, amazing given the circumstances. Allan moved to Quadra Island during the pandemic, and won’t be continuing as Trips Officer. If any of you are keen on trips and would like to take on the role, put your name forward. I, for one, will miss Allan’s voice at our meetings. Trip leaders I haven’t already mentioned include George Prevost, and the other Fall Fling trip leaders today, Peter Kearney and Sarah Cummins.

Our Training Officers are Chantal Ethier, also our Past President, and Katya Yushmanova, formerly our Conservation Officer. They managed to get four courses going again once COVID restrictions permitted. Instructors included George Prevost, Richard Jensen, Philip Kubik, Chantal Ethier and Susan Jensen. Peter Kearney I know led a trip today, but had to leave, and he was given an “Instructor” shirt before left. Rick Davies is here, and Chantal sent along this “Instructor” shirt for him.

Our Membership Officers are Walter Aragon and Enoth Hei Ho, and I’m happy to say that, despite the club operating at a reduced level during the pandemic, membership has stayed at a healthy level.

I know from my experience in other clubs, that the role of Treasurer is often the hardest to fill. We are very lucky to have Nick Heath in that role, very ably assisted by a skilled bookkeeper, Mary Yee. Nick also led a club trip to Gambier Island. As well as his official roles, Nick fills a couple of unofficial roles. In Howe Sound, Nick has been my mentor and partner in every project we have done there, the driving force behind the scenes, and the lead in our Apodaca Park project. Nick’s other unofficial role is Club Curmudgeon, a role we all love him dearly for.

John Leung is our Vice President and, more importantly, the guy who makes the Zoom magic happen for our club meetings and executive meetings and film festivals. Thank you, John.

The reason you are having to listen to me tonight is because our president, George Prevost, is away on a trip. And it’s well earned. I have been incredibly impressed by the job he has been doing, running meetings and stepping in to help with a committee whenever there has been an important job to be done or decision to be made. As mentioned before, George is a club instructor and led a club trip. George brings a very considered approach and a lot of dedication to running the club, and we are very, very lucky to have him.