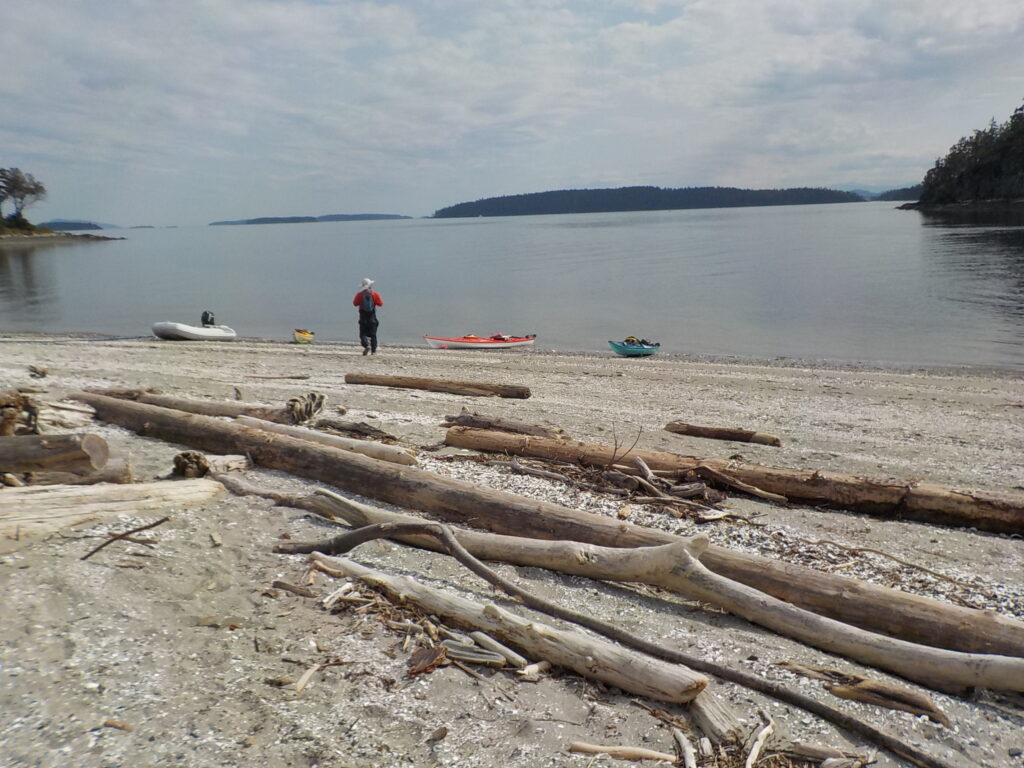 A weeks kayaking trip to the Southern Gulf Islands sounded awesome when I saw it posted. However I was also a bit apprehensive. I had yet to do what I call a shake out trip to get ready. This trip was doing long distances and moving everyday. Sure by August no problem but in April, I am not sure my body was up for it. Then I started to look at the weather of pouring rain for 2 days. Our leader Nick's response - be flexible. Bring a cart and we can just jump on a ferry.

So Nick, Kapilia and I showed up at Tsawassen Ferry terminal drop off area, with all kayaks loaded with gear on our carts. We were catching the 8:55 am ferry to Mayne. We had adjusted our itinerary to go to Galiano and join the Nav course for potluck. I was sold on this idea, because Montague Harbour campsite is a great group campsite. It meant we didn’t have to haul water on the ferry. Also, you can have fires.

So we saw Susan & Richard J on the ferry. Nick did some last minute planning with some input from Richard. Susan & Richard got off at Studies Bay and we continued on to Village Bay. We wheeled our kayaks off and had to navigate a speed bump and narrow gate to get to the beach launch.

We strapped our cart frame with a pool noodle to our kayak and put the wheels beyond the peddles in the cockpit. We then head out to Montague.

It’s always a bit intimating when you have to cross a ferry’s path. Especially when we got to Active Pass, because two ferry’s typically pass each other in that section. So you pray that you don’t screw up and don’t see the ferry as you make the crossing. We managed without any incident and made it to our destination.

We hauled our gear to the group campsite and setup our tents. The Nav course was going on at the beach and I took the opportunity to enjoy the peace and quiet and relax.

Around 5 o’clock the Nav group finished up their first day with Rick. So happy hour began. I was offered red wine by Deb but knew that wouldn’t be good for me. Then Kelly offered me a cooler. Now, that was an offer I couldn’t refuse and definitely made a great start to the trip. We had a delicious pot luck by the group and then followed by a fire. 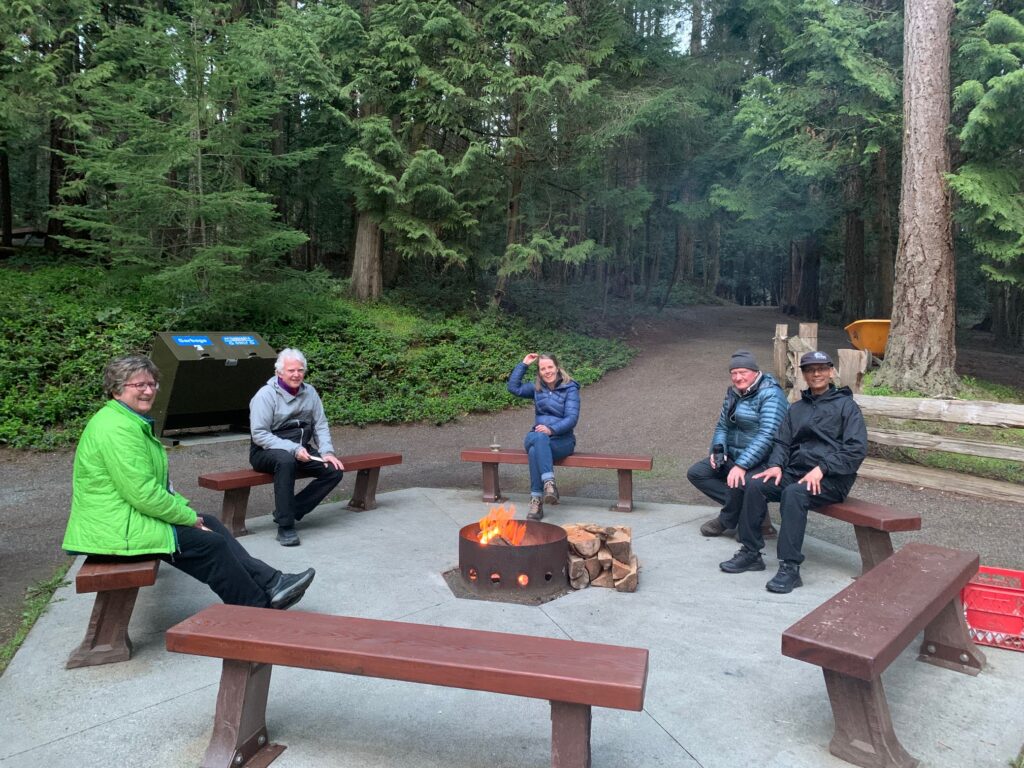 Sunday we had planned to go to Shingle Bay with a stop at James Bay on Prevost. It was a perfect day, with no wind and a favourable current. We made it to James Bay and checked out the campsites. We were all feeling pretty good so we made a change of plan. We decided to go to Portland Island instead. On the way we stopped at Grandma’s beach for lunch on Salt Spring.

After lunch we paddled to Shell Beach to camp for the night. We arrived on the beach to see a dinghy.

Kapila noticed a ravenous raven had been eating all the food in it. As we were unpacking our gear a young couple showed up and Kapila told them what had happened. They laughed because the crow had left them the gummy worms.

We setup our site and then the black flies arrived. I hadn’t expected bugs so early but they were glad to see us. We started cooking dinner when the wind picked up. This was a blessing because it kept the bugs away. After dinner it got really windy and I decided to head into my tent. No more then 5 minutes later it

was raining and windy. I was hoping I had pegged my tent down well, because I didn’t want to leave my comfy sleeping bag for any reason. The good thing is that wind and rain meant a good sleep because it is good background noise.

Next morning it had cleared up. Our next destination was a stop at Sidney Island and then to camp at D’Arcy Island. We headed toward Sydney Spit. I was looking at my chart and Kapila his GPS. Kapila was questioning Nick about the Island we were heading too. Nick said it was Sydney Spit but Kapila wasn’t so sure since his GPS indicated it was James. We hadn’t been to Sydney Spit before and didn’t dispute our leader. However as we got closer we realized it was James. So we had to head back towards Sydney Spit. This is when the wind and rain started and we had to put in some effort to make it.

The good thing when we arrived it had a shelter with tables and a wall of food caches. So we decided we would camp at Sydney Spit instead of pressing on. We got all our gear into the shelter. Just then the rain and wind stopped and the sun came out. We turned the whole shelter into a laundry room and hung all our wet gear everywhere.

I had debated about setting up my tent inside the shelter as there was space enough to fit all of our tents. After seeing Nick set his up his tent on the tenting site I decided to do the same. However Kapila decided to stick with the shelter.

Because we had this shelter and table Kapila decided he would do the cooking for the group. He was doing his chef duties on all 3 of our stoves and created a wonderful meal.

As was getting the routine, Nick and Kapila would go wondering the island while I would kick back with my camp chair and read.

Next morning we packed up our gear and headed to Darcy. The paddle was a bit solitary, as it was windy and you couldn’t really chat. When we got to the crossing over to Darcy the wind seemed to have calmed and for the most part was a fairly easy. We got to the suggested landing but opted to go to another landing that was better. The only problem it meant a long haul of gear to the tent pads. Nick and I decided to make the trek but Kapila decided to camp by the kayaks.

Darcy is a interesting campsite, since it’s a former leper colony. I came across a plaque that listed all the names of people that had died there. The majority of them where of Asian descent.

Next destination was Rum Island. It was a fairly short paddle there. But just as we were nearing the wind and rain arrived. We decided to stop for lunch and look at the 3 tent pads they had. I pulled out my poncho just for such an occasion to stay dry. After lunch we decided to stay. It was a really good decision because the sun came out and we had one of the most scenic sites of the trip.

Just around dinner time we were all just taking it easy when I heard voices. Next thing I know, is I see 3 kayakers. I say hello and ask them if they are planning to camp. They say they were and we said we could easily share the platforms. So Nick decides to meet them on the landing beach. However they never show up, which we couldn’t explain.

Next morning, we decide to have a late start and take advantage of the current and head to Shingle Bay. When a of a sudden a guy comes out of seems like nowhere. It was one of the kayakers just wandering the island. He told us they had found a nice spot to camp.

Around noon we got in our kayaks and head toward Shingle Bay. Nick’s suggestion to take advantage of the currents was a good one. We made a lunch stop at Thieves Bay, hoping to find water. A kind resident filled our water bottles for us. It made for such a easy paddle that we arrived in record time at Shingle Bay

After setting up camp and having lunch, Nick and Kapila just had to do a walk. So I did what I do best, chill out in my chair with a book. As I am doing this, I see this Raven poking around Kapila’s site. I go check it out only to see a couple of Granola bars that he had left in his hurry to get out and walk.

After dinner we had made a group decision to cut our trip short by one day. We had listened to the weather forecast and it was predicted to bring wind and rain the following evening. Once that decision had been made you then start to look forward to going home.

Next morning while having breakfast we had 4 deer come through our camp. It was a nice start to the day that only got better. We had decided to catch the 5:30 pm ferry from Mayne, so we had a full day to do some sightseeing. Nick had suggested we head over to Richardson Bay and check out the light house. Then go to Dinner Bay to check out the Japanese Gardens on Mayne.

Just as we are heading out Kapila has problems with his spray skirt. So we make a stop at the National Park office. It seems Kapila’s cord had untied. So 3 of us managed to get it back functioning again with Nick’s multipurpose tool.

This stop also allowed us to look around. We happen upon a women truck driver that was unload parts to make outhouses, which Nick appreciated.

We got on track and headed toward the lighthouse for lunch. However the crossing to Prevost was a bit more dramatic. We were making the crossing when the ferry to Swartz Bay comes out of Active Pass. We stop in the middle of the channel and we wait for it to set Its course. Then we start paddling again only to see it’s course right toward us. We then decide to wait and it passes us and then we make it to shore.

After lunch we head over to Dinner Bay. We walk through this sports field with this amazing complex sponsored by the Lions Club. Hidden in the frisbee golf course is a trail that leads to the gate of the gardens. Entering the garden was amazing with it’s pond and bridge with Cherry Blossoms. It was put there to honour the Japanese family’s who had lived on Mayne but interned during the war. 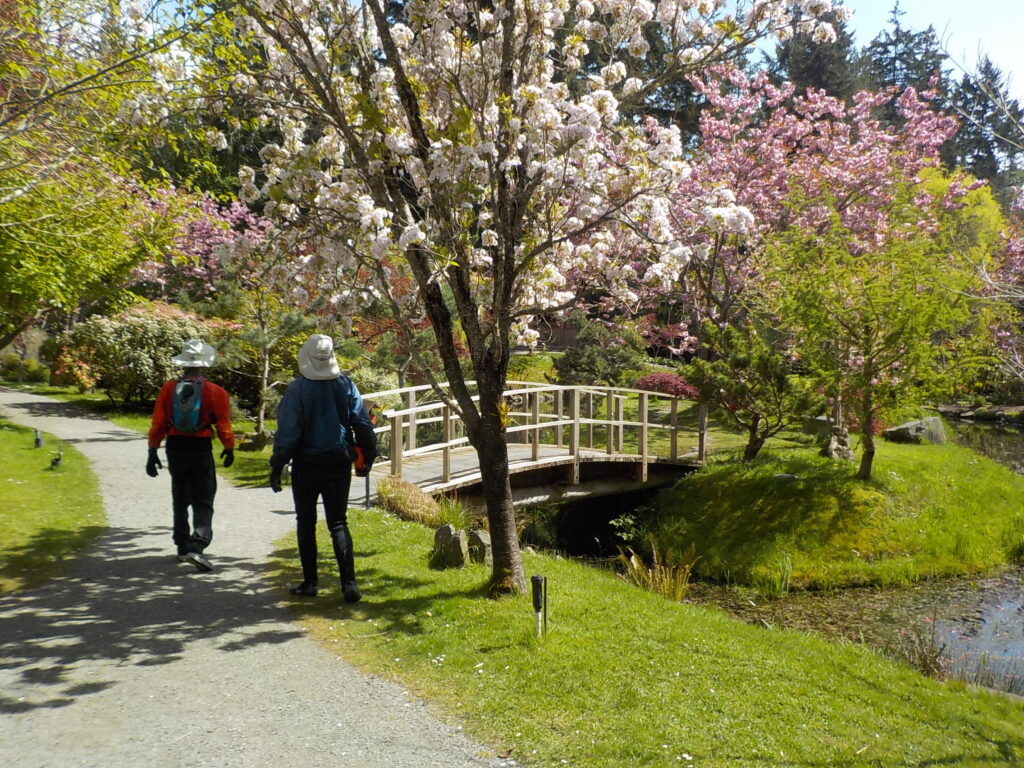 After a nice visit in the gardens we headed toward Village Bay and headed home.

It was a really fun trip and Nick is a awesome trip leader. We all enjoyed ourselves and learned some of the history of BC along the way. It has also opened up our eyes to doing more walk on ferry trips to do more Gulf Island adventures in the future. 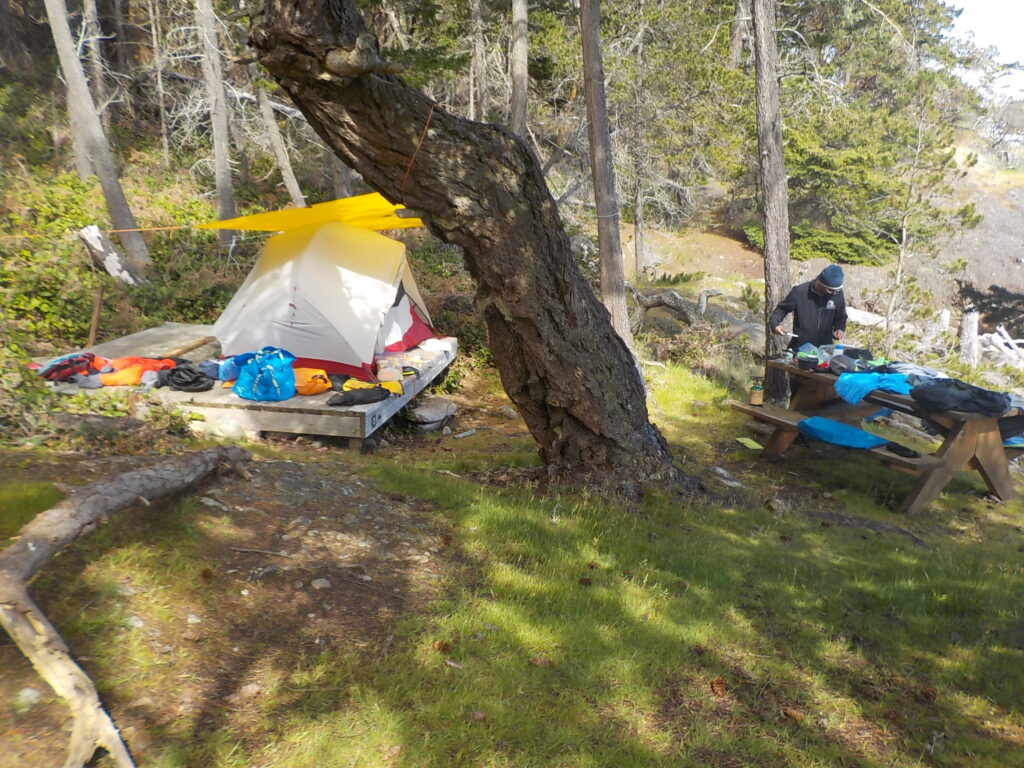 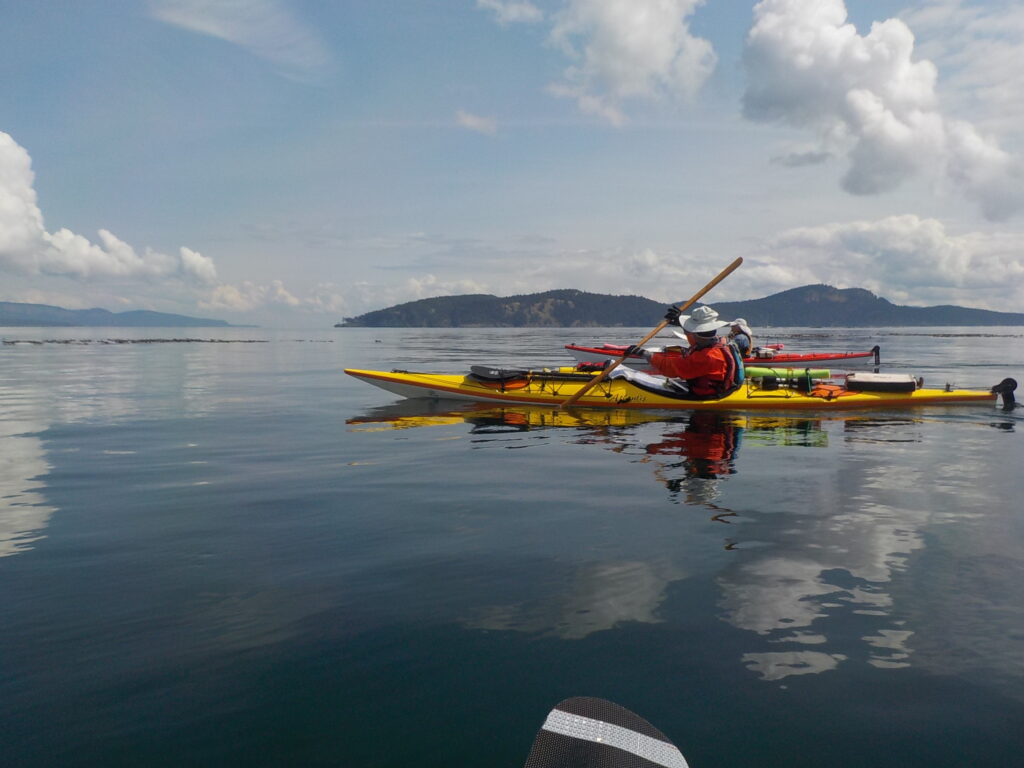 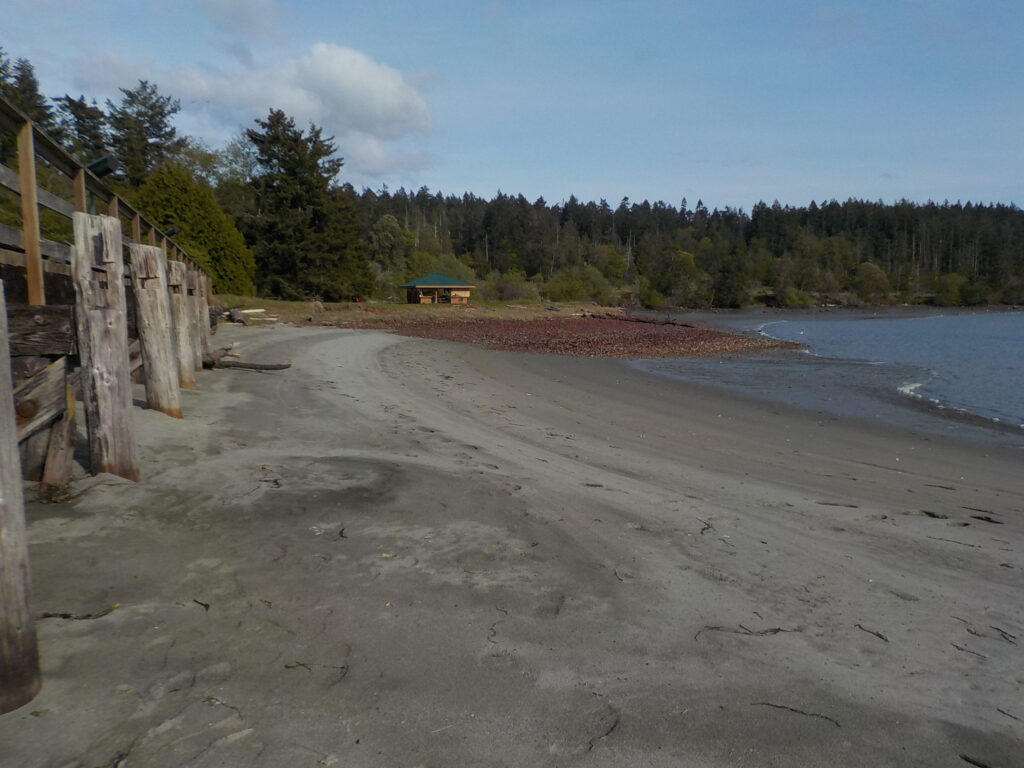 This entry was posted in general interest. Bookmark the permalink.