Seven people signed up for the trip but three people cancelled two days before the trip. The remaining participants, Maureen Benzon, Heather Kirk and Earl Elliott and myself met at at Porteau Cove provincial park which was surprisingly busy at 8:15 on a Sunday morning. We were on the water at 9 am as planned and paddled in the calm turquoise water towards the sea mist shrouded Defense Islands with Mount Wrottesley and Potlatch Mountain soaring above on the peninsular. 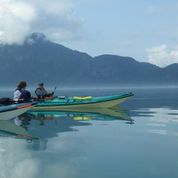 beyond to the rocky headland opposite Latona Point on Gambier Island. In perfect conditions the paddling was pleasant and relaxing: one of those occasions when one can easily retreat into a Zen like trance induced by the steady rhythm of the paddle and the quiet, peaceful environment. We reached the meadow at Douglas Bay, Gambier Island at around 11: 30. We had this pleasant spot to ourselves while we ate lunch in the warmth of the sun and enjoyed the view across Ramilles Channel to the western aspect of Anvil Island and the mountains beyond ranged above the Sea to Sky highway. 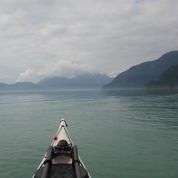 We were in no hurry to leave and somewhat reluctantly pushed off the beach at around 12:30 pm when very predictably the inflow wind hit us in the face. This gave Maureen an excuse to produce her latest kayaking gizmo, a pocket anemometer. Maureen asked us each to estimate the wind speed and Heather won handily by estimating a 10 knot wind which was very close to the instrument reading of 9.7 knots. Interestingly the other estimates were all on the low side; but then Earl and I are  inveterate optimists about kayaking conditions. We followed the shoreline of Gambier Island almost to Brigade Bay before heading across to Pam Rocks which, as usual was populated by dozens of Harbour seals basking on the rocks. We turned down wind and coasted to Christie Islet where we saw the large resident population of Glaucous-winged gulls with some surprisingly late fledglings, but also Harlequin Ducks, Oyster Catchers, Pigeon Guillemots, Ruddy Turnstones and Brandt’s Cormorants. 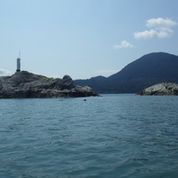 On then to the S.E. point of Anvil Island and then using a slight ferrying course to allow for the wind blowing straight up Montagu Channel we made our way towards Porteau. The wind never appeared to rise above 10 knots so we only had minor surfing on this last leg of our outing but never the less it was a fast paddle and we touched the shore a few minutes after 3 pm. There was a lot of activity at Porteau with folks picnicking, launching and landing boats, scuba diving and generally enjoying a beautiful summers day and all this busyness was a sharp contrast to the spacious almost deserted waters just a short paddle away. 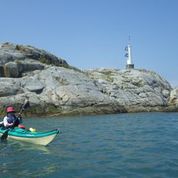 We covered 16.5 nautical on our wide ranging circumnavigation of Anvil Island and we were on the water for close to 5 hours for an average speed of 3.3 knots.

It was agreed that we had had an excellent day of paddling in great surroundings. For my part I enjoyed immensely the trip with such convivial and capable companions; thank you Heather, Maureen and Earl for coming along.

As something of a post script I should say that this is the third time this summer that I have made similar trips out of Porteau Cove; a reconnaissance day trip prior to the Kayak Cuisine weekend in late May, the KC trip on June 7/8 and the trip described above. I typically make similar trips in the area a couple of times each year; sometimes as early as April and sometimes as late as October. No doubt the fact that I live in Lions Bay just a short distance south of Porteau influences my choice of this destination but I rarely encounter any other paddlers in the area and I am puzzled by this. Central Howe Sound and Porteau Cove may seem a long drive away for many people but the Sea to Sky highway is now excellent and it takes perhaps 30 minutes to drive from Lions Gate  bridge to the put in. Admittedly, inflow and outflow winds can be a factor, particularly when crossing Montagu Channel, but close attention to the weather patterns and forecasts will provide plenty of opportunities for wonderful day or weekend paddles in an interesting and scenic setting.