2013 May Long Weekend at Blackberry Point 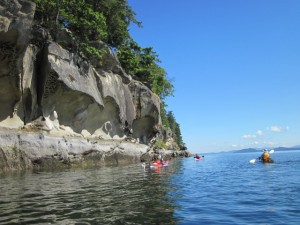 6 women, 3 cars, and ferry reservations to Galiano Island. 2 cars encountered such heavy traffic that they lost their reservations. The occupants of the first car would have gone on to Galiano but, so fully enjoyed their coffee and conversation within the ferry terminal, that they didn't hear the ferry departure call, and found their car standing all alone in the car lane when they came out of the ferry terminal. Reunion with the occupants of the 2 other cars and new plans are immediately etched. Shortly afterward, we all loaded onto the Duke Point Ferry. Who says that women can't be flexible and, anyhow, it's a prettier paddle from Cedar to Blackberry Point than from Galiano and the return options were so much more plentiful on Monday. We packed our boats at Cedar, then left at about noon in direction of Blackberry Point.

We ogled the beautiful rock formations on Link and De Courcey Islands at a leisurely pace and crossed over to Valdez and Blackberry Point. Our preferred campsites were occupied by friendly members of our sister club in Victoria so we set up in the meadow. The weather was a bit unsettled, so we strung up two tarps (Bob Salo would have been proud of us) and made ourselves a lovely kitchen under the huge arbutus tree. We raided another kitchen site and found a plastic patio table—very handy.

Day 2
We paddled over to Clam Bay on Thetis Island into light wind and occasional showers. We stopped off at the Cedar Beach B & B and chatted with Andy and Virginia Lamb: Kathy and Friends had not arrived at the B& B yet and we told A & V to say hi to their SKABC guests for us. After a brief paddle through the narrows to the marina, we headed back, skirting the Penelakut sand spit, crossing to Reid Island. Then, with wind and tide in our favour, flew back to camp. The following seas were a new, interesting and exhilarating experience for a couple of newer paddlers in our group.

Day 3
Some of us stayed on shore and decided to walk the grassy logging roads going south towards Porlier Pass, heading for a beaver pond recommended by friendly Crazy Pete. Although the pond was not to be found, it was a lovely walk, looking at the beauty of the new growth along the road and the peekaboo views of the islands to the west.

Others started paddling toward Gabriola Passage at the very reasonable hour of 9:00AM. They crossed the passage at about 11:00AM, pushed by slightly flooding waters. A short stop at Drumberg Provincial Park and back into the kayaks for a very pleasant paddle inside Breakwater Island, outside Saturnina, Bath, Acron, Gaviola, and Carlos islands. We had a short lunch break on Tugboat Island, paddled around Silva Bay and Sear and Tugboat islands and were on our way back to Gabriola Passage, which we crossed with a mild flooding current. Shortly after the booming area on Valdes Island, we found a lost dinghy. Kathy and Christine decided to rescue the dinghy, and towed it to the little harbour just before Blackberry Point. There were a few old looks from boaters. Back at the campsite around 5:30PM for very nice curry prepared by Karin

Day 4
North West winds came about 3:00AM and continued most of the morning. Bigger seas and stronger winds meant that people stayed on shore and chose to hike the trails instead. Blue skies and warmer temperatures made it a pleasant on-shore day.

By 3:30PM, the wind had died down and Joan decided to practice rolls while Kathy and Christine paddled around, “bagged” two more islands, Pylades and Ruxton.
The day was topped off with a great potluck dinner and an evening campfire.

Day 5
We awoke to calm seas and light winds for our final day. Our central kitchen was returned to its former look - a lovely grassy area under an amazing arbutus tree. Tents and gear disappeared into the boats, and we were ready to go. Favorable tides allowed for arrival at Cedar in record time.

On arrival home, the RCMP was contacted about the rescued dinghy, but they seemed to think the reporter was a bit of a nutcase. I mean kayakers aren’t usually in the “tow a dinghy business”. A quick search on Google, and the owner was found thru craigslist! Still waiting to hear if owner has been reunited with the dinghy.

Fantastic trip planning from Karin and lots of talented on-water leadership from Kathy. Exceptional food provided by all. Wonderful company! A perfect start the 2013 season.