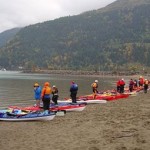 Thanks to Majbritt and Mike Schmidt for this report.

It was a dark and stormy morning when all 19 intrepid paddlers left Vancouver for Harrison.  The endless Vancouver summer had just ended.  Unfortunately it had not ended soon enough to put some water in the river – Karin assures us that it was the lowest she had ever seen it.  From the outset we knew that a trip up the tributaries and spawning channel was unlikely.

Despite Harrison’s best effort to kayak-proof the beach (there is a 5 foot wall up and a 5 foot wall down in the way) we pretty soon had a system going for getting all 18 boats down to the water.  Weird not having to worry about the tide coming in and washing your boat away.

After distributing our cars throughout the Fraser Valley, we managed to set sail by 10.30 – no rush because the side trips were off the cards.

It did not take long to get into the river, not much current at the inlet but pretty soon we started to see the salmon splash and jump.   We also started to see and smell the floating and beached carcasses of the ones that did not make it.

We stopped off at the first pictographs (ie. Aboriginal graffiti from way back when), it took quite a bit of time for Karin to explain what we were looking for.  Then we headed downstream to the lunch spot.  Quite surprised that we could not quite get into the beach – the low water levels required quite a bit of kayak dragging. 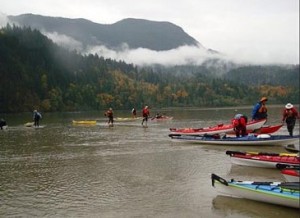 Lots of wildlife in the lunch area (crayfish, eagles, crows, salmon (dead and alive)) and not many places to “go”.  The pictographs at this spot are much easier to find and see.

After lunch the current started picking up nicely – we were pretty much cruising past all the fisher people.  With all the salmon we could see, it is difficult to understand if any of them left with empty coolers.  A bit of confusion reigned at the entrance of the spawning channel with some trying it out (only to be washed up on the sand bank) and others zooming by.  A push from a helpful fisher person sorted that out and we were away again.

Hard to believe but we managed to see a harbour seal all the way up in the Harrison river.  He was a long way from home.

The current died down towards the end, so we had to paddle into Kilby park.

Once again we had to retrieve vehicles from all over the Fraser valley – quite exhausting.  Some of the exhausted were forced to retreat to the Sasquatch pub to revive – from our point of view, the best Nachos ever.  It’s worth the drive out there for them alone.

Thanks very much to Karin for organising.  And thanks to all for participating.  For those who decided at the last moment to pass on this one because of the “dark and stormy” stuff, you missed a great trip.